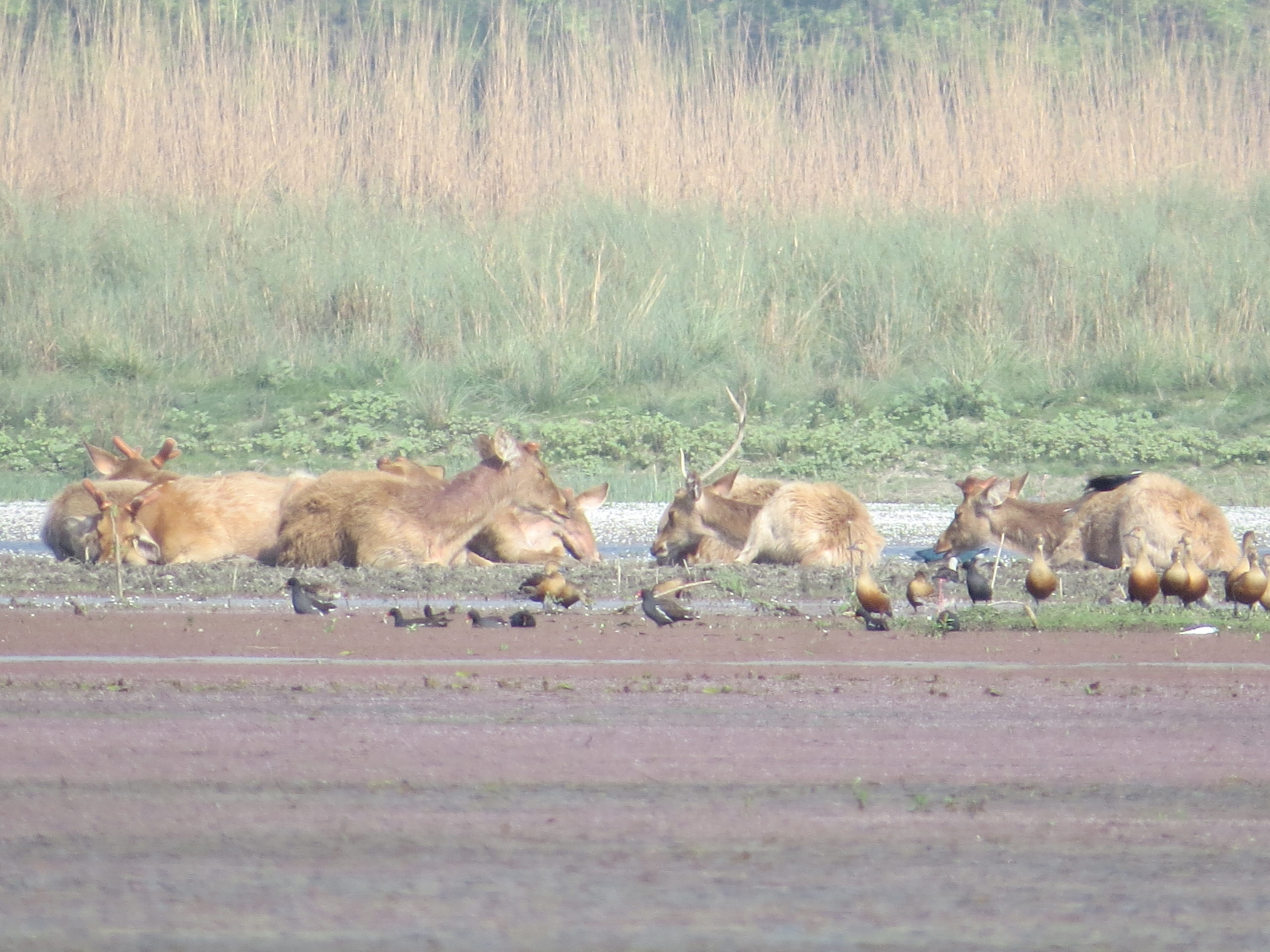 “Well the beautiful dream is over!” that is exactly what I felt, when I returned from back from the Kishanpur Range, Dudhwa Tiger Reserve. The two days at Kishanpur were like a dream, a dream come true.

My friends and I started from Lucknow on a Saturday morning at around 8 A.M

Kishanpur,a four and a half hour drive from Lucknow, lies 5 km from Bhira town in Lakhimpur Kheri District. Spread in a compact area of 200 sq Km, it is a part of Dudhwa Tiger Reserve.

We enjoyed a nice drive and reached the camp at around 1 P.M.

We had our lunch and were ready by 2 P.M. to visit Jhadi Tal. Jhadi is a large clear water wetland formed by the flood waters of the Sharda.

It was a great pleasure driving on the forest dirt track canopied by the tall Sal tress. In fact, this was a real ‘long drive,’ a city dweller ‘longs’ for. With no other vehicle on the track, the smooth forest road was a treat.

We soon reached Jhadi Tal. A number of migratory birds graced the Tal.  On the far end, we could see the grasslands locally referred to as the phantas. We spotted a large herd of barasingha or swamp deer. It was, in fact, a harem dominated by a solitary handsome stud in the company of some 24 females. They were all squatting on a circular island like mound. Two pythons had made their nest just about 500 yards away from our vantage point. But by the time, we approached the nest, the sun had retreated and the pythons had slithered deep inside the warmth of their home.

We made our way to the second machan. Here we saw an even bigger herd of swamp deer. I counted 47 of them. Most of the members of the herd were males. Their mighty antlers glistened brightly. Most of members were seated near the grassland. The herd was waiting for the dusk so as to proceed concealed into the jungles to munch the soft grass. This was the largest herd of any deer species ever seen by us. Infact Dudhwa Tiger reserve, particularly Jhadi Tal is the last refuge of Northern Swamp Deer.

We drove further ahead to the Sharda River. A narrow stretch of silted land separated the river from the Jhadi Tal. The river has been rapidly changing its course. It has shifted almost 4 km towards the Jhadi Tal over a short period of time. We could see a number of uprooted trees on the banks. We also spotted a lonesome croc on the far bank.We made our way back to the second machan, eager to glimpse the evening retreat of the Swamp Deer into the Sal Jungles. But, unfortunately, the forest guide insisted that he had orders to return.

It was soon nightfall. The waxing moon was shining bright. We could not see many stars in the sky. Around the fire, we discussed about the mystical ways of nature. The jungle was now wide awake. We heard the scary sounds of the jungle. The owls announced their presence. At close quarters, a cheetal hurled a call of alarm. The very feeling of the jungle king, the tiger, lurking around and observing you, was very exciting.

We went back to our tent to stretch our limbs for the night.

Next morning, armed with binoculars, bird-books and breakfast, we were ready to visit Jhadi Tal again. As we moved on the jungle track, we saw the pug marks of a tiger. He was brazing our trail. I am certain, he saw us, liked us and blessed us as well.

We reached the second machan. The moment we stepped out of our vehicle, the birds started to literally run away on the waters of the Jhadi Tal. We stationed ourselves on the machan and enjoyed breakfast and watched birds at ease and peace. It was for the first time that we saw the Red Crested Poachard. The distinct reddish pink beak was glittering. The tufted orangish hair on the head of the drake was very interesting; while his white body was a total contrast. The duck had a brown head. We also saw the dab chicks, grebes, common pochards, pintails, mallards, shovellers, river terns, the distinct white eyed poachard, spoonbills, egrets, snake birds, herons, black necked storks, Indian Water hen, purple moor hens and the cormorants. A herd of swamp deer, numbering around 29, was also to be seen. We saw a brief action as well. Some active members locked their antlers for a rather brief mock fight. Oh! And how can I ever forget the naughty, chubby otter family. We saw five of them. At one moment they were perched on the barringtonia tree just underneath the machan. And soon afterwards, they were swimming merrily and effortlessly in water. They would dive in and pop out their head with a glistening fish in their teeth. They gobbled up their catch in great gusto, gup-gup-gup. They were indeed quite an amusing sight; but they also shooed the birds away. Wherever they went the birds drifted elsewhere. After sometime the otters were back on the same tree, looking very cute in their shinning coat.

We drove towards Jhadi baba (a mighty banyan with pillared ariel roots). Soon the Sal forest gave way to a dried and burnt grassland at the other end of Jhadi Tal, Hence, we entered the dense green riparian forest, which extended till the river. I prayed to Jhadi Baba to save the precious Tal and to call us time and again to this great paradise.In this jungle of jamun, gular, khair, rohini, peepal, bargad we spotted a few cheetals, hog deer and peacocks.

We returned back to the camp. And after lunch, we spent a leisurely afternoon napping in the winter sun on comfortable armchairs. in the evening, we drove to the Tar Kothi area. The track passed through a dense Sal and Teak forests. Tar Kothi was an uninteresting forest post near a bio-fenced farm; with a canal flowing nearby.  We returned back through an interesting untouched forest track and spotted a Sambar mother and child duo on the way. In the Terai jungles, the sambar deer is even rarer than the tiger. We also drove to Kishanpur Village around 2 km from guest house. This village of 500 voters is a big threat to the wildlife of the Range. The villagers have been provided with full fledged track for the movement of their vehicles. From early morning till late night, the rattling tractors and bikes ply on the road, disturbing the tiger habitat. There was not a single sighting or even a trace of wildlife in the dense forest around the track. 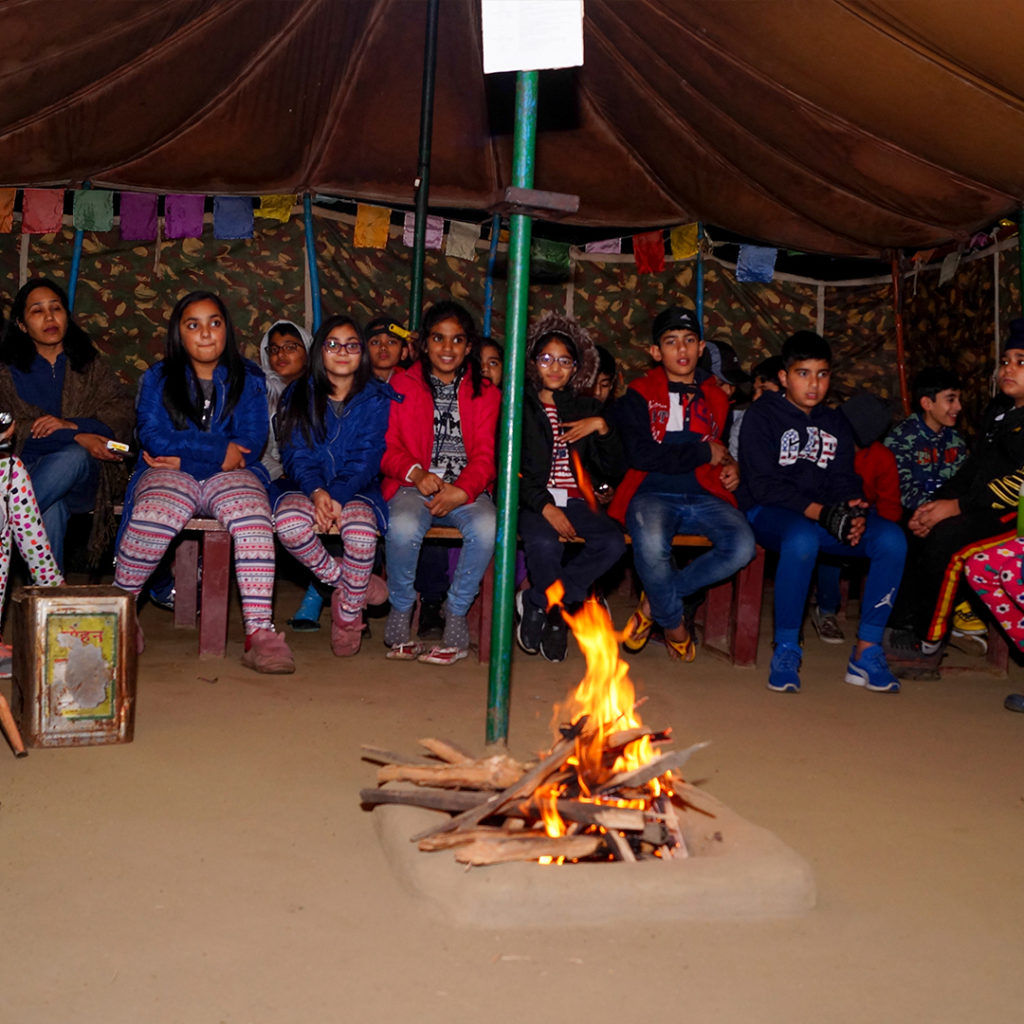 On our return to the camp, the staff set the fireplace ablaze. It was a real romantic setting for us. We sat near the fireplace for long time chatting, gossiping and philosophizing. The hot food was a treat as well. we could finally get some sleep. I was woken by the chital’s alarm call which was followed by the roar from the king himself. The king had come himself to greet us, but we were asleep! Well! We shouldn’t be complaining. It was our fault. We didn’t dare venture outside the camp.

Early next morning we packed our bags and drove back to Lucknow with indelible memories of the jungles of Kishanpur.