Dudhwa: A Fairy Land come live for a Birder

Like any other kid, I almost lived in the World of Fairies and Fairytales. Like any other adult, I always enjoyed reading about fairies. They have been a part of my beautiful world. It never bothered me whether fairies existed or not. However, with the inexorable passage of time, I spent less and less time with them; till they almost disappeared from my mind.

A bit late in life, I have realized that fairies are not a mere figment of the imagination. They are as real as you and me. They have a world of their own; they live, they breathe, they love, they care and they communicate with us. I really regret the fact that for so many years I lost my communion with such a wonderful world. One day, as I peered through my widow, I suddenly rediscovered my long lost world. It was now even more fascinating. And this world was not confined to my imagination alone. I could experience it with all my senses.
I did not make this discovery through an Extra Sensory Perception given by a Super Intelligent Alien; nor was it through an awakening of my inner yogic or psychic powers. It was a birthday gift from a dear friend that rekindled my old romance.

The gift, a pair of binoculars, enabled me to see the beautiful fairies. I was astonished. It was simply unbelievable. There were so many different fairies flitting just near my home. And I was not even aware of their existence. If only I had cared to notice earlier in life! My very existence would have been blessed.

Birds, I believe without an iota of doubt, are the fairies that our grandma’s told us about. We imagine fairies as beautiful creatures with wings. A bird in flight surpasses the most fantastic image of beauty our mind can conceive of.

Bird Watching has enriched my experience of life. It hasn’t just been an interesting pastime. It has brought back the simple joys of childhood. It has sharpened my observation and concentration. It has given me a scientific outlook. It has made me Eco-conscious. But more than anything else it has even shaped the philosophy of my life. 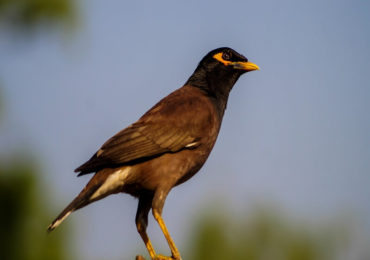 The first exercise of identifying the birds of the garden was delightful. ‘Bulbul, Myna and Koel,’ words that I was so familiar with started making sense. I discovered that there were many types of Bulbuls and Mynas. But there was just one type of Koel worldwide, the one found in India; the other similar birds were Cuckoos. I came to know that the brown bird that hovered around my school at lunchtime was not an Eagle but the Kite. My knowledge of birds increased exponentially, simply by strolling around neighborhood parks and gardens. Soon, I began to identify the tree-pie, magpie robin, kingfisher, coppersmith, barbet, bee-eater, white eye, tailorbird, blue jay, the shikra, spotted owlet, crow pheasant, hoopoe, seven sisters, doves, parakeets, chats and a host of others. I was overjoyed. I was amazed to see so many fairies, so to say, just across the door. But it was painful to find that the commonest bird of my childhood, the Sparrow, was becoming uncommon. And I was aghast to discover that the sturdy Vulture had disappeared. What have we done to our beautiful world? I thought with disgust and anger.

I often wonder what if I had taken up Birding when I was yet a child. My father was serving in the Indian Army. We traveled the length and breadth of this marvelous country. What insight I could have gained! By now I would well have been an authority on Indian Birds. Unfortunately, that didn’t happen. It has been a sad loss. But I have decided to compensate for this loss at Dudhwa National Park.

This is because Dudhwa is strategically located on the Himalayan foothills, the Terai. 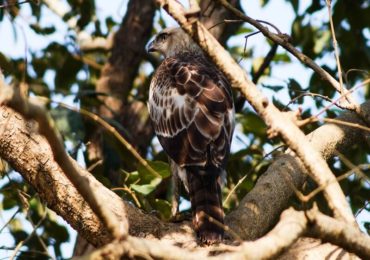 The Terai Bio-geographic Zone is a complex mosaic of three distinct Eco-systems: the Sal Woodlands, Swamps and Wet Grasslands. Each Eco-system is unique and is inhabited by distinct species. The Geo-diversity of Terai thus supports one of the richest biodiversity on the planet; birds being the most perceptible and colorful examples. Some Four hundred and fifty species of birds inhabit Dudhwa.

As Dudhwa is located on the foothills, it is the perfect winter capital of the incredible Himalayan Birds: wagtails, minivets, finches, buntings and flycatchers. The graceful wild ducks and teals, from Tibet, Ladakh, Central Asia and Siberia, also rest and recuperate here during the winters. Large congregations of these birds can be seen basking in numerous wetlands of Dudhwa. The other bird families sighted in the wetlands and water bodies of Dudhwa are, first and foremost, the Sarus Cranes, river terns and gulls, storks, ibis, herons, egrets, sandpipers, curlews, lapwings, plovers to name a few.

The Grasslands of Dudhwa provide shelter to numerous species of weaver birds, finches, buntings, pipits, chats, warblers (the toughest family to distinguish) as well as the partridges and quails. The last two families, the so called game birds, have made a remarkable recovery since the establishment of the National Park. 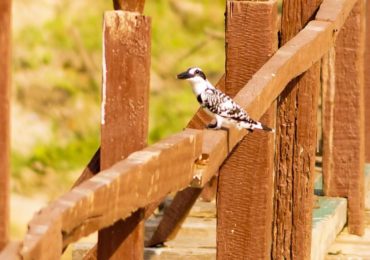 The dense jungle is the domain of the multihued pitta, the rather ferocious looking owls, the endangered Indian and Pied Hornbills, woodpeckers, nuthatches, tree creepers, orioles, nightjars, drongos and the pompous jungle fowls. Many members of daring and athletic raptor family are only to found in the dense jungles.
Dudhwa is home to nine species of Endangered Birds. These are the Black Crested Baza, Great Indian and Indian Pied Hornbills, Laggar Falcon, Shaheen Falcon, Red Headed Merlin, Osprey, Peafowl and the Bengal Florican. The re-discovery of the Bengal Florican in the year 1980 at Dudhwa was a landmark event. This critically endangered bird and the Great Indian Rhinoceros thrive in a similar habitat. The presence of the Bengal Florican boosted the confidence of the Naturalists about the success of the Rhino Rehabilitation Project at Dudhwa. They gave their assent for carrying out this unprecedented project of reviving the Rhino, after almost a hundred years of its extinction at Dudhwa.

I have evolved a personal technique of Bird Watching. Now that I can identify quite a few families, I do not focus much upon taking notes or referring to the Bird Book. I simply ‘stand and stare.’ I just gaze and gaze, till the bird disappears from my sight. I was forced to adopt this technique at Dudhwa. On my first visit to Dudhwa, I stood on the machan (somewhat arrogantly) and surveyed the vast expanse for Birdlife. I was benumbed. Almost every other moment a certain species would pop up and soon vanish. I feverishly browsed my Bird Book; till its pages got detached. I simply could not cope up with the identification anymore. I decided to change tack and just observe the fairies. Observe thoughtlessly and effortlessly.